Blanding’s turtles are most frequently found in complexes of small acidic wetlands, vernal pools located in forested habitats, in marshes, forest and shrub swamps, and slow-moving streams… many of the habitats are found around Watchic Lake.

The domed shell and yellow chin are distinct for this species of turtle. And a fun fact not known by many is that Blanding’s turtles are very long lived – a female that has been studied since the 1950’s was recaptured at a site in Michigan at 83 years old and still laying eggs.

With a better understanding of the endangered species around our lake, we can do a better job of protecting the lake and watershed. If you think you have spotted a Blanding’s turtle please contact Derek Yorks, IFW Wildlife Biologist at derek.yorks@maine.gov or at (207) 941-4475. A photo, location, and time/date of the observation would be greatly appreciated. 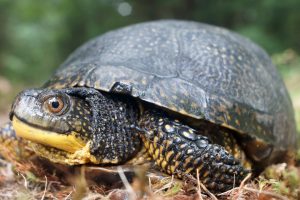 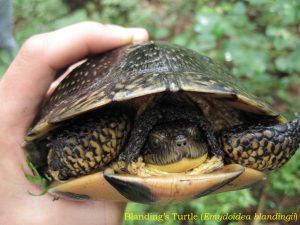