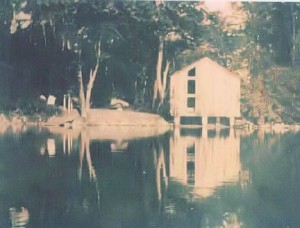 A dam at the north end of the lake controls the water level of the lake. The dam was constructed in 1850 and was deeded to the Watchic Lake Association by Central Maine Power in 1956. It is currently owned and managed by the Watchic Lake Dam LLC. Regular maintenance of the dam is provided by the WLA Dam Committee and WLA membership fees and donations.

To address seasonal changes, the dam gate is opened to lower the water level on about November 1, and is closed again to raise the water level shortly after ice-out (between mid-April and early-May). Click or touch here for Watchic Lake historical ice-out dates. This helps avoid shore damage from winter ice and protect loon nests in the spring. The exact opening/closing date may vary due to weather. The water level will generally lower/higher by about 18 inches over a two week period following the opening/closing of the dam gate.

Between about May to November, volunteers check the water level at different locations on the lake. These volunteers will adjust the dam gate when they see water level approaching about 3 inches over full pond. For example, should we receive significant rainfall over a short period, the dam gate will be opened for enough time to bring the water level closer about 2 inches over full pond, allowing a cushion for dry spells and evaporation.

Thanks to contributions for WLA members and others, the dam was completely rebuilt in 2010 after nearly 90 years of use. In late 2013 new safety measures were put in place. The design of this new dam has improved the flowage out of the lake, and generally kept the lake within an inch or two of full pond (in fact the lake has not been more than 3 inches above full pond since the new dam gate was installed). When the dam was rebuilt and modified, the capacity of the dam to spill water above full pond without manually opening the gate was increased by 400%. This reduced the number of times the gate needs to be manually opened and closed to maintain water level during the summer months by 75%.

Check this website for updates on dam opening and closing dates.

All operational goals for the dam were again met for 2019. The water level was maintained within plus or minus three inches of full pond from June until the dam was opened on Columbus weekend (given the heavy spring and late summer rains, more manual adjustment than normal was required). During the fall the dam is opened to the number one position to slowly lower the level for the winter. In early November the dam is set in the full open position. The safety floats in front of the dam were installed in early June and removed for the winter in November.

A general inspection of the dam structure was done throughout the year. The concrete work on the dam was found in good condition and not in need of any major repair work at this time. The earthen structure is also in good condition without any signs of erosion or weakness. The gate and operating gear remain in good working order without need of repair. The wood bearings were not lubricated last year but will be this summer.  The dam structure is in good condition and the dam life extension project is exceeding its goals. I think the life extension period can be extended by at least ten years at this time.

The west wall of the sluiceway however has an erosion problem at the water line that needs attention periodically. This is not a dam failure issue but a minor one that can be repaired as required. The cause of this problem was created by a repair made years ago that change the angle of the wall creating a pressure wear point. The next time concrete work is done on the dam this can be corrected for a minimal cost.

After over thirty years, it was time to replace the gate on our dam. Two WLA volunteers, David Bradbury and David Ross, guided the installation of a new gate late in October. This new gate was built by David Bradbury and Donal Drew from hemlock farmed and milled on David’s property. David Ross fabricated the various fittings needed to secure and operate the gate. This new gate should make for a more consistent water level, be easier to operate…and last at least another thirty years! 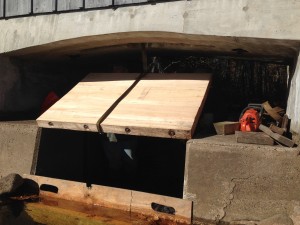 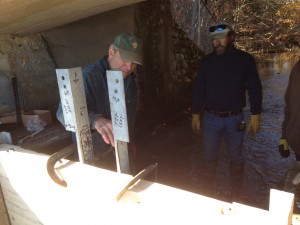 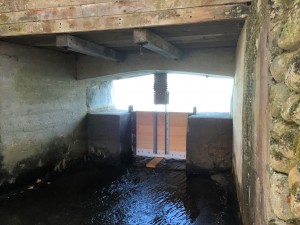 New gate about ready. From behind the dam.