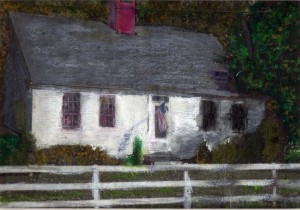 In about 1752 a group of veterans from King Georges War were granted rights to the land that is now Standish Corner. Settlement began slowly and a fort was built to protect against Indian raids. The fort was inhabited by six families with an estimated total of 65 people. Eventually the town of Standish was incorporated in 1785, and as of 2020 has a population of about 10,300. More detailed early history information can be found at the Town of Standish website and at the Maine An Encyclopedia website.

The area around Watchic Lake was for years primarily used for farming and grazing. The first cottage reported to have been built on the lake was in 1892, and was the Hartford Cottage (a yellow Victorian) on what is now Hartford Lane. As of 2020, there are approximately 250 properties around the lake, some directly on the waterfront and others with right of ways to access the lake. The dam at the north end of the lake was constructed in 1850 and was deeded to the Watchic Lake Association by Central Maine Power in 1956.

There are many stories and memories from people living and vacationing on Watchic Lake. We’ve included a few here and encourage you to add your comments or send your stories to us via our Contact Us form 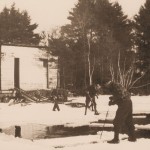 Ice in the Early Days

Ever wonder how people chilled their milk, meats, veggies, and of course their beer during the warm summer months on the lake? Ice from an ice-house of course.  David F. Drew writes in his book An Almanac of the Paine Neighborhood and Watchic Pond From 1800 to 1935 “When my ... 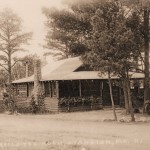 Have you ever driven past the current Two Trails Diner at the intersection of Rte’s 25 and 113 and wondered how it used to be? We recently came across a some post cards (back in the day of one cent stamps) and and a newspaper advertisement for the “2 Trails Tourist Ca ... 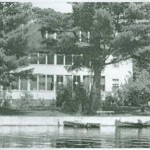 The Porches – Camp for Boys or Home for a German Spy?

Ever wonder what it must have like back in the 1940’s to attend a summer camp? Funny enough, not too different from today… boys from the city would come out via the train (not car) to stay at the camp for one to three months to learn fishing, swimming, boating, etc.  Parents, the ... 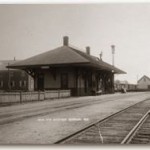 In 1949, Donal Greenleaf wrote a wonderful memoir on his summers as child on Watchic Lake at what is now the camp at Watchic Rd 7 (TCV for “Twentieth Century Views”) . Thanks to his niece, we have posted the full memoir here. Below are some excerpts of the Watchic experience of h ... 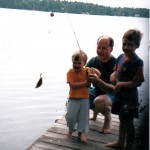 I had enjoyed fishing as a kid and an adult, which was one of the reasons we chose a place on Watchic Lake. I have lots of fond memories of fishing with my two sons, but this one is special as my youngest son had just caught his first fish. This was about 1995. ...

Amazon announced that it is winding down it’s AmazonSmile program by February 20, 2023. Purchases ma...

December 2022. Based on analysis done by FB Environmental, sediment and other pollutants entering Wa...