Thank You for Murder and Mystery on Watchic Lake 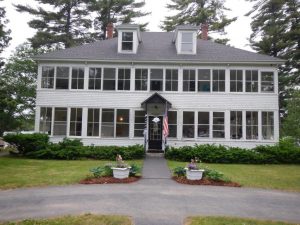 Thank you to Becky, Isabelle, and Mike Hanaburgh (owners of the Little Gatsby Cottage on Hartford Lane) along with friends Derry Rundlett , Eric Shute and Patty Taylor for sponsoring a Murder Mystery charity event at their home on Watchic Lake on June 17, 2017. The event was a huge success with 60 friends, family, and people from in and around the lake in attendance. Due to the success of the event, a donation was made to the Watchic Lake Association.

Local lake property owners worked alongside professional actors to play out a mock Italian Wedding Murder Script (“The Great Gatsby meets the Godfather”).  Actors played the parts of President Trump, the Great Gatsby, and Duchess of York.  Everyone agreed the best performance was by Mike Hanaburgh himself who played a secret service man for President Trump, never once veering from his part.  Mike’s daughter Isabelle, was perfect as the daughter of the Great Gatsby, played by Derry Rundlett.  Also included in the script was a part for local lake historian Donald Drew, whose family has owned property on Watchic Lake since the late 1800’s. Derry Rundlett did a fantastic job of writing the script which was customized to Watchic Lake and The Gatsby house, where his family lived for 9 years.

Thanks to all who participated and help make this a successful and fun event!