Injured Loon Chick Rescued, But Did Not Recover 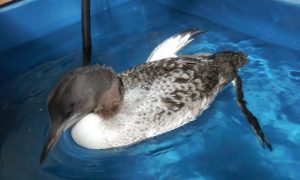 Updated September 22, 2019. Over Labor Day Weekend several lake residents noticed that our loon chick’s right wing was injured. Kim and Steve Lajoie, co-chairs of the WLA Loon Committee approached the loon for a closer look and it was clear that there was a problem with the wing that made flight impossible. Steve and Kim contacted Lee Attix of Loon Conservation Associates and Avian Haven, a bird rehabilitation center in Freedom, ME to recommend a course of action. Both experts recommended capturing the loon and transporting it to Avian Haven for examination.

With the help of lake residents Don Drew, Martha Drew, Owen Smith, Kim, and Steve attempted unsuccessfully to net the loon on Sunday, September 1st.  On Wednesday, September 4th Lee, along with another loon expert and lake resident Bob Babcock successfully captured the loon, confirmed that there was an issue with the wing, and transported it to Avian Haven.

The chick was further evaluated and found to have several additional deformities. Unfortunately the chick died shortly afterwards. The chick was well taken care of during this time. Thank you again to Steve and Kim for attempting to save this chick. 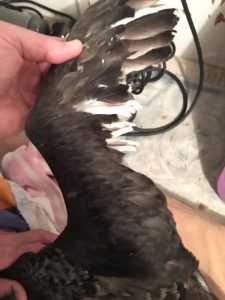