Another wonderful report from Kim and Steve Lajoie on our loons…

Unbeknownst to us when we bought our camp in December 2011, we had bought a house directly across from the loon nesting site on Middle Island. This meant that in early June when the chicks are born and mom and dad start exercising their babies in preparation for the November flight, they bring them to the quiet cove between our house and the Kiwanis Beach. This has given us the miraculous experience of seeing the babies grow and watching the amazing parenting of two adult loons.  Every year we watch, bond, celebrate milestones (first dive!), and grieve when we lose one or like in 2105, lose the only one born on the lake.  We are so happy to say that this year 3 babies were born on the lake and at this writing all three are thriving and preparing for their first flight.

We think it’s worth noting that while the summer lake activities are winding down there is an abundance of miracles still taking place.  Just today we saw six (!) migrating eagles fly over the lake!  On a recent kayak outing an adult loon and two babies sought us out and played around us for over 20 minutes.  We’ve been “talking” to the loons since they were babies and they seemed to know our voices based on the comfort they had swimming around the kayak, the comfort of mom with the babies right up against us, swimming under the boat and clearly interacting with us. Again, a miracle in motion.  The photos below were taken on that day.

They are so precious and we are so lucky to have these amazing beings in our front yards.

In the Spring, we will continue to welcome back both Biodiversity Research and Maine Audubon researching, tracking and educating us once again.  In the meantime, please always keep an eye out for our loons. Remember that lead sinkers and boat collisions are the two leading causes of loon death. Remember as well that keeping our water quality clean and in A+ LakeSmart condition keeps our loons returning and thriving, our house values high and our swimming quality magnificent. 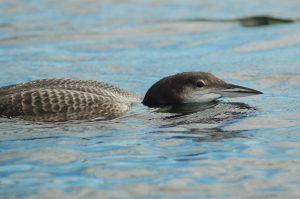 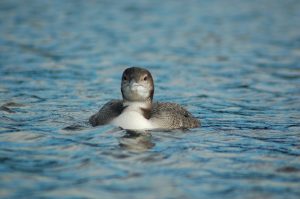 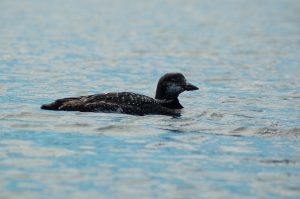 Thanks to the efforts of Kim and Steve Lajoie, plus Cathy Watson and Wendi Rodrigueza, Watchic Lake participated in its first Annual Loon Count on July 16th. The annual Loon Count is sponsored by the Loon Project at Maine Audubon, where volunteers count and track changes in loon families, and then report them to Maine Audubon.

This summer three chicks and five adults were counted and recorded with the state as of July 16th. One pair of chicks is at the northwest end of the lake, the single chick is at the southeast end, and all seem to be doing well so far this summer. They are getting much bigger and have started diving for longer periods. Their backs are still brown but you can see the white really coming out on their chests and undersides. The parents of the northwest pair seem to leave the chicks alone quite often while there is almost always a parent with the single southeast chick. There has been a visiting group of five young loons that we have seen on and off for the last few weeks.  They do not seem to bother or be bothered by the parent loons which the team thought was interesting. 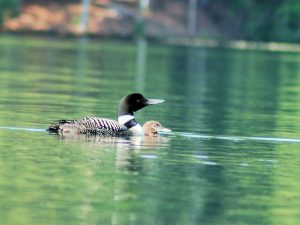 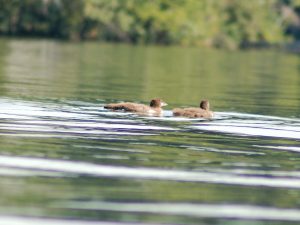 There have been many visits by the bald eagles, with one recent visitor perching himself on the rocks of Middle Island. When this occurred,  all four loons at this end of the lake, the two adults and the two chicks, boldly circled the rock until the eagle flew away. That same rock also played host to a large snapping turtle. 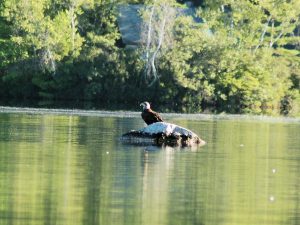 On Monday 8/8 there were two adult eagles and two young eagles in the trees on Big Island. When the loons spot the eagles in the air above them, they make a high pitched call (much like they do when the seaplane comes in).

The WLA is investigating a program called Loon Smart, a partnership between Maine Audubon and the Maine Lakes Society. We will be forthcoming with news about how we might participate in the future.

Please remember to be careful when boating on the lake, the loon chicks are still quite small compared to adult loons and can be hard to see, especially when the water is not smooth. According to the Maine Department of Inland Fisheries and Wildlife collisions with speeding boats and personal watercraft remain a leading cause of loon deaths in Maine be careful and encourage others to be aware.

Again, thank you Kim, Steve, Cathy, and Wendi for your efforts to count and report on the loons. 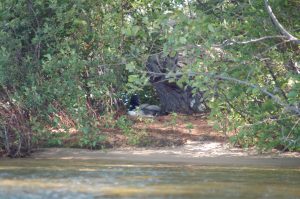 Based on WLA volunteer observations, there appear to be two pairs of loons on the lake, with one nesting pair settling in on Middle Island and another pair on Big Island. About July 4th, one pair of chicks was spotted with an adult loon. And on about July 8, a third chick from the second nesting pair was spotted.  Loons can pop up anywhere at any time – PLEASE keep an eye out for them and respect their space when boating. Thank you to the Lajoies and John Blake for the photos.

On Wednesday evening, July 30, wildlife biologists from BioDiversity Research (www.briloon.org) completed banding loons on Watchic Lake.  They were able to get both the male and female swamp loons and the male island loon banded. The female island loon didn’t want to cooperate.  The chicks legs are not big enough to be banded at this time.  Capture was done with a large net and a very bright light.  Several measurements are taken including blood samples, throat swabs, and the birds weight, then bands are applied and the loon is released.  It takes about 35-40 minutes to process a loon from capture to release.  Overall, a very interesting evening! Thanks to Ben Tripp for providing this information.

Banding allows Maine Audubon and other similar organizations to identify individual loons to understand their history and provide better data for loon population models. While the loons are not harmed, they can be quite noisy during. You can learn more here about the Maine Audubon Loon Project. 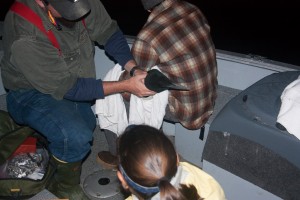 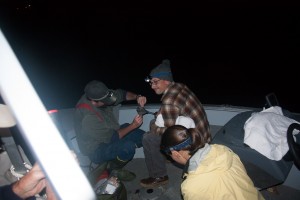 Thanks to Ben Tripp

Ben Tripp has again contributed some great photos of our Watchic Lake loons. According to Ben, we have two loon families on the lake, each consisting of two adults and two hatched chicks. The chicks are now about three weeks old (as of July 17). The Island loons have the territory from Spear Point to the Big Island and across and north to the Rt 113 side. The Swamp loons have the territory at the other end of the lake, near the inlet by Watchic Road 1.

The Island loons had their nest on “Happy Face Island” (in the usual location on the north side of the island).  The Swamp loons again had their nest down in the inlet by Watchic Road 1.

Loons continue to offer all of us on Watchic Lake some magical moments.

Thanks Ben for the photos and info. 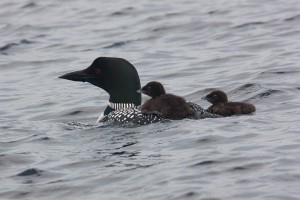 Island Loons on Mother’s Back 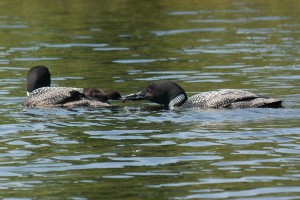 Swamp Loons Getting Fed after Hatching 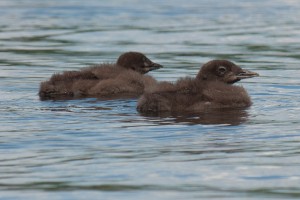 As of August, the chicks are 6 weeks old now and we now have several visiting loons. During the August we witnessed a bald eagle try to attack the chicks and adults were in complete defense mode and drove the eagle off. 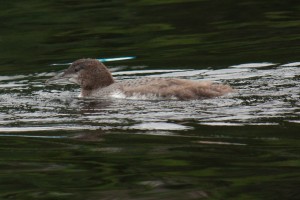 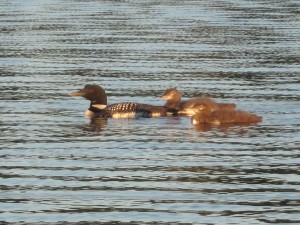 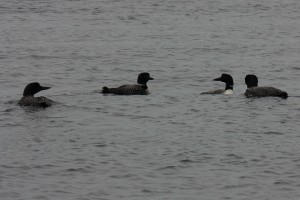 The Island loon chicks hatched on July 5 and 6.  Chicks are already diving and staying down 10 to 15 seconds. 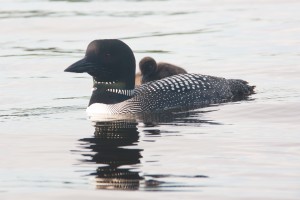 Baby loons out for a ride with mum… 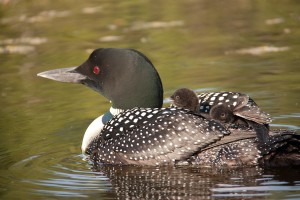 A Second Successful Meet and Greet at the Outpost

Thank you the Watchic Lake users and and owners who joined us Wednesday August 24 at the Outpost for...

This listing includes events happening on Watchic Lake or in Standish. Many other regional events ca...