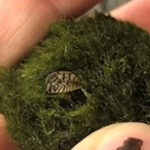 Invasive zebra mussels – Destroy! Do Not Dump. Zebra mussels have been found in “moss balls,” an aquarium plant product sold in Maine. Moss balls are commonly sold under trade names such as “Betta Buddy.” Zebra mussels, which so far have not become established in Maine, are one of the most destructive invasive species in North America. Zebra mussels can quickly take over once they get established in a waterbody and cause significant damage including disrupting the food chain, changing
Read More

This listing includes events and happening on Watchic Lake. Many other regional events can found at...